On 14 September 2017 Loren Gulliver on behalf of Nicholes Family Lawyers attended a breakfast hosted by Victorian Women Lawyers and Women Barristers Association to celebrate the Honourable Chief Justice Marilyn Warren AC’s career and contribution to the role of women in the legal profession in the lead up to her retirement.

Guest speakers the Honourable Justice Tate and Jennifer Batrouney QC shared stories of Her Honour’s extraordinary contributions to the legal profession and achievements in her career.

Appointed as a Judge of the Supreme Court in 1998, Her Honour was appointed to Chief Justice by the former Attorney-General Rob Hulls in 2003, becoming the first female in Australia to hold the position.

Her Honour is well regarded for being a strong advocate for other women in the legal profession and has for many years sought to bring attention to the obstacles that have prevented women from rising to the top of the profession despite making up the majority of law graduates.

The Law Institute of Victoria (LIV) described Chief Justice Warren as a distinguished leader and an inspiring role model.

In May 2016, Her Honour ended the tradition of Judges and Barristers wearing wigs in the Supreme Court, arguing that they were not part of a modern court and that the Judiciary and Counsel should be more accessible to the general public.

Her Honour has also advocated for Courts to embrace technology, overseeing an increase in the Supreme Court’s social media presence to improve community understanding about legal issues.

The breakfast was attended by many women in the legal profession who all paid tribute to Her Honour at the end of the speeches with a long standing ovation.

Nicholes Family Lawyers is a strong supporter of women and equal equality within the legal profession and is a proud sponsor of the Victorian Women Lawyers Association.

Justice Anne Ferguson will be the next Chief Justice of the Supreme Court of Victoria following the retirement of Chief Justice Marilyn Warren AC. 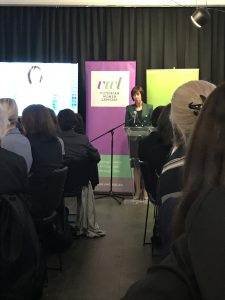