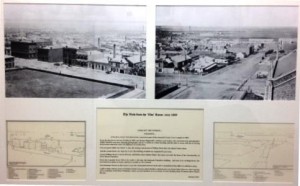 Sally Nicholes and the team at Nicholes Family Lawyers would like to extend their many thanks to Bruce Walmsley QC for his lovely gift, pictured above.

The print depicts the view from the Nicholes Family Lawyers office overlooking the Supreme Court and surrounding buildings using both photographs taken by John Noone, and diagrams from the year 1869.

Mr Walmsley QC presented Sally Nicholes with the print this week which is to be hung in the John Udorovic QC commemorative rooms at Nicholes Family Lawyers.

Mr Walmsley QC wrote an explanatory statement about the print which states:

Look out the window…

at the three-storey Victorian terrace, restored as part of the relocated County Court complex in 2002.

From the third level balcony of what, in 1869, was Doctor Fitzgerald’s residence and surgery, the renowned early photographer JOHN NOONE took these amazing photographs, one at 7 o’clock on a clear morning, and the other at noon, with the air having deteriorated somewhat under the influence of wooden fires. Can you guess which was which? A clue: the dozing work horses in William Street have the shadow below them. And the vacant block: our Supreme Court, the building of which was completed 8 years later. Across William Street to Guests Biscuits, and Robert Airey Cabinet Maker: that space currently the home of the Victorian Bar, at Owen Dixon Chambers. Down the Lonsdale Street hill on the south or left side: the Seabrook Chambers building. And next to it, on King Street: the hotel known to many as Lazars, and more recently The Colonial.  The bluestone church on the County Court site: dismantled brick by brick and re-assembled in Box Hill. It is still there today. A gift to Sally, and her team at Nicholes Family Lawyers, and to further commemorate our friend John Udorovic, who’s passing was so untimely, from Bruce Walmsley, whose current chambers is in an iCloud, of sorts, floating about 30 metres above Guests Biscuits.