We understand that separation is a difficult time. We ensure that our clients are aware of their options and can see a way forward.

On Monday 11 April 2016 the Law Institute of Victoria’s annual Legal Comedy Debate was held as part of the Melbourne International Comedy Festival.

This event is always a highly popular evening and this year did not disappoint with the Athenaeum Theatre hosting a very full audience.

The topic of this year’s debate was ‘Is stupidity a crime?’. The debate was moderated by the Honorable Betty King.

The two debate teams were made up of Senior Counsel, Barristers and Lawyers who presented their arguments with quick witted, entertaining and hilarious speeches.

Nicholes Family Lawyers’ Rebecca Dahl starred as part of the affirmative team, along with Mark Woods and Rachel Doyle SC.

At the conclusion of the debate the audience determined (with a competitive battle of applause) that the negative team was victorious.

This year was Rebecca Dahl’s second year participating in the Legal Comedy Debate and her hilarious arguments did not disappoint and proved to be an absolute crowd pleaser.

Congratulations Bec on a stellar performance! 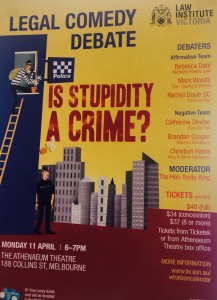