The event forms part of Melbourne’s iconic Midsumma Festival. Couples converge from around Australia and New Zealand to perform in front of a panel of esteemed judges. As 2017 marked the Championship’s 21st Birthday the party was bigger and better than ever.

From nervous beginners in the Novice events to seasoned Champions in the A grade and some just-for-fun novelty events. All the beautiful Ballroom dances were seen – Waltz, Foxtrot, Tango and Quickstep and the wild and passionate Latin American events of Samba, Rumba, Cha Cha Cha, Jive and Paso Doble. Even the audience was encouraged to participate with social dancing throughout the night.

Rebecca Dahl of Nicholes Family Lawyers presented the winning couple of an A grade event with a trophy named in honour of Allan Merigan, who was a close friend of Sally Nicholes.

Nicholes Family Lawyers have been a long standing sponsor of the Championships and we look forward to continuing our association with the event for many years to come. 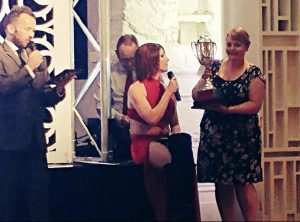