Nicholes Family Lawyers and WIRE join together to present a seminar on Seniors Rights and Elder Abuse featuring a panel of experts and practitioners.

Elder abuse is any act occurring within a relationship of trust, which results in harm to an older person. Elder abuse can take various forms including:

The impact of elder abuse on older people can be life changing, leading to poor physical and mental health outcomes, poverty and homelessness.

Whilst elder abuse is believed to be greatly underreported, the World Health Organisation estimates that it affects between 1 to 10% of older people worldwide. Australia has an aging population and the prevalence of neglect and abuse suffered by elder citizens has sparked a national conversation about the need for greater protection.

Australian case law such as Stanford v Stanford has recognised the Family Court’s ability to intervene when elders are being financially abused and provide recourse even if a breakdown of the marriage has not occurred. Many anecdotes of this kind involve adult children shifting their parents assets and in a bid to control the family wealth.

In February 2018 Attorney-General Christian Porter stated that elder abuse was a top personal priority. He announced that a national plan would be developed to stop physical, emotional and financial abuse of elderly Australians, especially those living in care.

For more information, register for our free seminar: https://www.eventbrite.com.au/e/seniors-rights-and-elder-abuse-tickets-46556061433 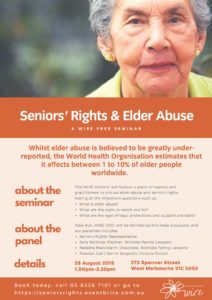